Hall Of Fame: The Whirlwind by Transatlantic 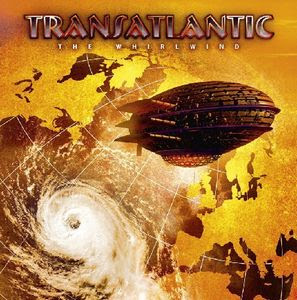 Some excerpts from a review I wrote on this album:

“The Whirlwind” is a masterful concept album from the minds of Neal Morse, Roine Stolt, Pete Trewavas and Mike Portnoy. When I first heard that Transatlantic was reuniting for another album, I was ecstatic. “Bridge Across Forever” is my favorite album of all time, and when I discovered that Transatlantic essentially broke up after this masterpiece, I was crushed. I figured that I would never hear new Transatlantic material. Thankfully, I was wrong, and not only did Transatlantic meet my high expectations, they exceeded them. “The Whirlwind” is a beautiful album that captures for me four talented artists at the peak of their creativity and ability.

Pete Trewavas really impresses me with his bass work on this album, it is consistently amazing throughout the album. Roine Stolt has some amazing guitar solos peppered throughout the album (some of the best in my opinion come in the middle of “The Wind Blew Them All Away” and “Out of the Night”). Mike Portnoy is amazing on drums as usual and I always love Neal and he continues to shine on this album by bringing a high level of emotion and passion to everything he does. I absolutely love the Overture that starts the album. It is a masterful way to include all the main themes that will be explored throughout the album in such a way to build excitement in the listener. Other favorite moments include the heartfelt "Rose Colored Glasses" and the last half of “Is It Really Happening?” where the music gets faster and faster and all members of the band play at breakneck speed.

I love the creativity that abounds when these four individuals get together to create music and I hope to hear a lot more from them in the future. There is a sense of fun in this record that is infectious and that is part of what I love about what Transatlantic brings to the table. They can be goofy and fun in one moment and heartfelt and passionate the next. They truly have a love of the progressive rock of the seventies and that shines throughout the album as well. This album is most definitely a masterpiece and I expected nothing less from the creative forces at work behind it.
Posted by Nathan Waitman at 6:54 PM