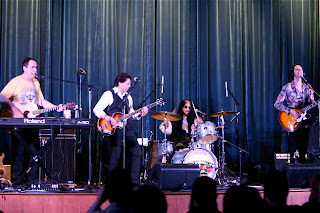 I was privileged to be able to attend a concert by Beatles tribute band, Yellow Matter Custard, last week. They did two shows back in 2003--the second was actually recorded for DVD and CD and showcased a group of very talented musicians having a blast playing many classic (and lesser known) Beatles songs. They decided to "come together" again and play some more Beatles tunes in three very lucky cities. The band consists of Mike Portnoy, Neal Morse, Paul Gilbert, and newcomer Kasim Sulton who replaced Matt Bissonette, the man who played with them in 2003. This time around, Mike Portnoy made sure to craft a setlist that did not include a single repeat from the shows they played in 2003. I was worried that we would get the lesser Beatles songs, since these weren't good enough to make the top thirty songs that they played last time. However, I was pleasantly surprised by the killer setlist, which I think was even stronger than the one from 2003. It is a real testament to how strong the Beatles' catalogue is (heck, they could probably even make an equally strong third setlist).

The show was truly incredible. It was apparent that each of the four musicians were having a blast on stage. Their energy really transferred to the audience and made for a great experience. Even though they stayed mostly faithful to the Beatles' arrangements of the songs they played, they had a few moments that allowed for their incredible musicianship to shine. One particular example was an extended guitar solo at the end of Taxman that showcased Paul Gilbert's amazing skills at the guitar. They also really shone during a White Album medley where Alan Morse came in as a guest and traded solos with Paul Gilbert and Neal Morse. Throughout the night, they all traded off vocals and each had their strong vocal moments. I was also impressed by the harmonies they were able to pull off as a group. The show ended perfectly with the Abbey Road suite from the second side of Abbey. The musicians really played their hearts out and the night was brought to a thrilling conclusion.

I loved this concert experience. Although the Beatles' music is not the most technically complex music ever written, there is a timeless quality about it. They are true pioneers in the rock sound of today and I believe are one of the most important bands to influence Progressive Rock itself. It seemed fitting that these progressive rock musicians would pay tribute to the band that might have been the first to be truly progressive. I left the concert that night with a smile on my face and a desire to listen to my Beatles' albums at home.

Here is the complete setlist of what they played, which I feel is a perfect balance of the well known songs, along with some surprises of songs that aren't played very often at all.

Back In The USSR
I Got A Feeling
And Your Bird Can Sing
Day Tripper
Getting Better
Taxman
It Won't Be Long
You Really Got A Hold On Me
Lady Madonna
We Can Work It Out
I'm A Loser
I Don't Want To Spoil The Party
Penny Lane
The Fool On The Hill
You've Got To Hide Your Love Away
Things We Said Today
If I Needed Someone
Its Only Love
She's A Woman
The Word
Any Time At All
Paperback Writer
Don't Let Me Down
I'm So Tired
Savoy Truffle
Glass Onion
Yer Blues
Helter Skelter
-----------ENCORE------------
Flying
Because
You Never Give Me Your Money
Sun King
Mean Mr. Mustard
Her Majesty
Polythene Pam
She Came In Through The Bathroom Window
Golden Slumbers
Carry That Weight
The End

39 classic Beatles' songs that they all played excellently (40, if their impromptu rendition of Birthday is to be counted). Overall a very enjoyable night full of fun and great musicianship. I am very glad I was able to attend!
Posted by Nathan Waitman at 11:21 PM