Hall Of Fame: Close To The Edge by Yes 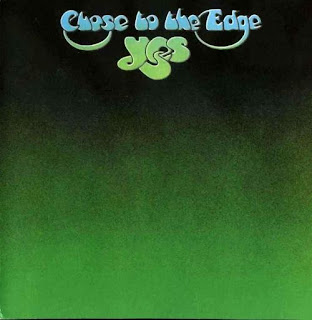 I have decided, after much thought, that I am going to create a Hall of Fame on this blog. The tab for said Hall of Fame is located at the top of this blog and is called "The Leviathan Hall Of Fame." The Hall Of Fame will contain songs or albums that I consider to be classic. You can call them strong recommendations or just a list of my favorites, but I thought it would be fun to put them in a hall of fame to honor the music that has touched me so deeply throughout my life. The hope is that The Hall of Fame will become a huge list of what I consider the best in music. Then, the viewers of this blog can conveniently go there in order to find some very strong recommendations about which music to pursue. Of course, in the beginning, the list might seem sparse, but I'm hoping over time it will grow and become quite substantial. Also, there is not really any limitations to what I can include there. I will try to stick to music that I consider progressive, though, so as to keep some consistency.

So, for my first entry into the Hall of Fame, I figure that a good choice would be the prog classic, "Close To The Edge" by Yes. For the purposes of this entry, I am referring only to the song, not the entire album (although later I may decide to induct the entire album). "Close To The Edge" was one of the first progressive rock epics I was introduced to when I was first getting into prog music. I was pretty much blown away by it on first listen. My dad was the one to share it with me, and he warned me that it was really weird, especially the beginning. But, I really connected with it right away, and I feel that "Close To The Edge" is one of the biggest reasons why I am a huge prog fan today.

The epic is introduced by sounds of nature, taking you into an alternate world. I feel the best music is able to transport you to another world, and Yes has a unique talent to do just that. The music is then quite chaotic with mainly a crazy drumbeat, noodling guitar, tinkling keyboards and thumping bass, interrupted occasionally by Jon Anderson's spacey vocals. Then, the chaos subsides, the guitar plays the main melody of the song and things get underway. What really sticks out to me here is Chris Squire's bass playing. Before listening to progressive music, I often was unable to recognize the bass in rock music. But, here, it is unmistakable due to Chris Squire's distinct tone and groove. Now, the bass is one of my favorite instruments to listen for.

About eight and a half minutes in, the upbeat music stops, and what is left behind is a dreamy atmospheric section that is truly heavenly. Jon Anderson, Chris Squire and Steve Howe sing some wonderful harmonies that truly bring tears to my eyes. Then, Rick Wakeman comes in with a powerful organ solo that is mind-blowing. It is truly one of the highlights in progressive rock for me. Then, the band kicks back in with the killer main melody of the beginning before it fades out with the same sounds of nature that began the epic, bringing everything full circle. It is truly musical perfection. I wish I had the ability to describe the true euphoria that I feel when listening to this epic. It transports me to another world, and makes me feel true happiness.

Here is the epic split up into two youtube videos. Please have a listen and hopefully you'll be transported to another world like I am.

Posted by Nathan Waitman at 6:13 PM