Artist Spotlight: The Reign Of Kindo 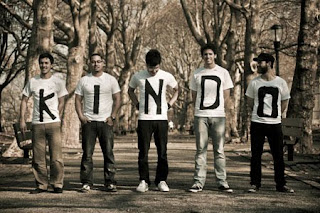 I thought it might be a fun idea to spotlight some of my favorite musical artists when there aren't many new albums to review. So, the first band I thought I would spotlight is a new band I have been obsessed with over the past few months, namely, The Reign of Kindo.

I think part of my obsession comes from the fact that this is a band that is very different from what I typically listen to. They are not really progressive rock in the sense that I'm used to. Sure, there are some progressive elements in their sound, but mostly they are an indie jazz rock group. Of course, musical labels aren't too important, what matters is the music and how it connects to the listener. For me, The Reign of Kindo create a unique blend of sumptuous melody, jaw-dropping musicality, and heartfelt emotion. The passion for music oozes out of each of the musicians in this band and I find myself totally captivated by the music they create.

I thought it would be fun to go through their relatively short career so far and showcase some incredible youtube videos of them performing songs throughout their discography. The hope is that you will watch the videos and perhaps become enchanted like I was by the music.

First, they released their self-titled EP which contains 24 minutes of beauty that really showcased their sound right from the start. The six tracks on this EP really show this groups penchant for tight musicianship and melody. Here is one of the tracks from that record called "Needle and Thread":

I love all the musicians involved, from the extremely tight drummer, to the incredibly smooth vocals. Just because it is so awesome, I have to include another song from their EP. My personal favorite, "Just Wait":

It is just too cool for words, and I struggle to really capture how I feel about this music in writing. It just grooves so magnificently and the piano playing is sublime. It is refreshing to hear a rather young group of musicians playing music that is technical and led by piano. I love it.

Their next album is "Rhythm, Chord & Melody" which is a true masterpiece to me. Everything just works perfectly here. They took everything that worked from their EP and expanded upon it. The title track itself, which is a pleasant instrumental, is just true genius. I love the controlled chaos of this group as they get into their more frantic moments. But, at its heart, there is just a certain groove that is infectious. Here is a video of the last song of that album, "Hold Out":

Their most recent album is "This Is What Happens" from last year. This is my favorite work of theirs, and since I already called their previous album a masterpiece, that is high praise. Every track on this album is brilliant and has a really transcendent quality about it. All the trademarks of their sound are still here: the super smooth vocals, the sublime jazzy piano, the jaw-dropping rhythm section and grooving guitar work. I am blown away by this band and the sounds they are able to create. Have a listen to the somewhat chaotic but beautiful track from this album called, "Bullets In The Air":

I just can't get enough of this band and their sound. There is just something about it that brings tears to my eyes every time. At times it is fun and others it is heart-breakingly beautiful. I only hope they continue to release music of this high level of excellence. I am going to end this spotlight with one of my all time favorite tracks of theirs called "Flowers By The Moon". It is hauntingly beautiful, with some wonderful violin work.

I hope this hasn't been too long and perhaps has introduced a few people to an incredible band that deserves some attention. I can't wait for what this band comes up with next! It is exciting!
Posted by Nathan Waitman at 3:54 PM