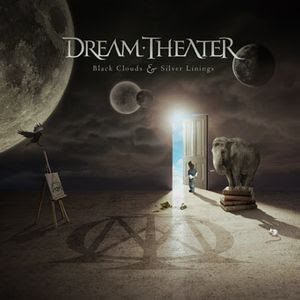 Dream Theater have been one of my favorite bands ever since I first heard Scenes From a Memory. Scenes From a Memory was a revolutionary album for me—it instantly connected with me and introduced me to a genre I love called Progressive Metal and began my fascination with this band which of course led me to pick up all their albums and to eagerly await their next album (which at that time was Train of Thought). The album in question here is Black Clouds and Silver Linings, which I don’t hesitate to say is one of the best albums Dream Theater have ever created. It is a masterpiece in every sense of the word and I haven’t been this excited about Dream Theater since I first heard Scenes From a Memory over five years ago.

Black Clouds and Silver Linings, just as the name suggests is a record about the hard times in life and being able to find the “silver linings” from these experiences, such as a lesson that can be learned or pulling out something good that came out of the hard experience. The album opens with a storm, representing the black clouds, before the band comes in full force with “A Nightmare to Remember”. This is one of Dream Theater’s best openers and really causes the excitement to rise within the listener. Mike Portnoy is in top form as he drums with intensity, even doing some blast beats. One of the best parts of this song is the “Beautiful Agony” section where things slow down a bit and James LaBrie shows off his incredible voice. The band comes back in and Mike is able to give some growling vocals to accent the fierceness of the vocals before the band comes in for a quirky and fun instrumental section before the song ends.

“Rite of Passage” is the single from the album and it is a typical metal song, although much better than the previous single from the last album “Constant Motion”. This song has a wonderful sing-along chorus and a great soloing section where John Petrucci and Jordan Rudess get to show their chops on their respective instruments. A notable moment is the bebot solo from Jordan which is done with use of his iphone. The next song, “Wither”, is a beautiful ballad—one of the best ballads this band has created. “The Shattered Fortress” is the conclusion of the 12 step saga that Mike Portnoy has written about his steps in overcoming his alcohol addiction. It is a powerful finale that incorporates all the best parts of the whole saga and it has some more incredible solos from John Petrucci and Jordan Rudess.

“The Best of Times” is a touching song that Mike wrote for his dad who passed away recently. The song makes me tear up because it such a sincere lyric from Mike that shows that he is truly speaking from his heart. Continuing with the theme of the album, this song shows how his Dad’s death was a black cloud, but the memories they shared is the silver lining that he can take away from it that will help strengthen him throughout the rest of his life. One of my favorite moments of the whole album is the end of this song where John Petrucci performs a magnificent guitar solo that is emotionally moving and a great way to end this song.

The final song of the album is “The Count of Tuscany” and it is one of the best Dream Theater epics. The introduction is an excellent showcase of the whole band, and it is one of the most brilliant melodic sections of music the band has ever crafted. The story of the song is a personal experience by John Petrucci where he took a ride with a man who called himself the Count of Tuscany and was an odd man with a brother who is compared to a cannibal. John feels terrified for his life in this situation being in a house with these eccentric characters. There are so many great instrumental moments until finally there is a break and a big atmospheric Yes-like section starts of for the next several minutes. The finale of this song is one of the best parts of the whole album where the Count tells John that he is not as scary as John thinks he is and that John is free to go and to tell everybody about him and his brother. It is a majestic closing with wonderful guitar and James LaBrie’s voice is on top form here.

As you can probably tell, I love this album. I consider it a masterpiece. From the opening storm to the majestic closing, I am captivated by it. I can’t wait to see them live in August and I hope they perform some of these songs at that concert (please play A Nightmare to Remember and The Count of Tuscany!). I think this album is the perfect balance between the different styles Dream Theater has: metal and progressive; hard rocking and emotionally touching. It is a perfect balance, which I believe is another manifestation of the Black Clouds and Silver Linings theme. This is going to be a tough album to top this year (Transatlantic, I’m looking at you). I am thankful for all the brilliant music that Dream Theater has created throughout the years and am delighted to say that they still have “it”. As evidence of this, this album landed at #6 on the billboard charts—the highest position the band has ever received throughout their career. This album is a band playing at the top of their game, and I hope they can continue making brilliant albums like this one.