95. Genesis- Trick of the Tail 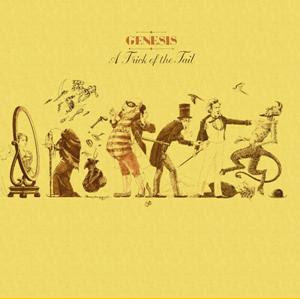 “Trick of the Tail” is the first Genesis album after Peter Gabriel left the band following their masterpiece “The Lamb Lie Down On Broadway”. Genesis have a very special place in my heart because they are one of the first four prog bands that I ever heard (the others being Gentle Giant, Pink Floyd and Yes). My dad is a huge fan of Genesis and is the one who introduced me to them and it was a magical experience. He mainly focused on the Peter Gabriel Genesis albums (which I will get to in later entries) and I discovered the Phil Collins Genesis albums later. Trick of the Tail is solid proof that Genesis was more than capable of carrying on without Peter Gabriel (much like Spock’s Beard carrying on without Neal Morse). Phil Collins does an excellent job of taking the role of front man and singer. This album has a really positive mood about it and it always makes me happy when I listen to it.

There are several standout tracks here. The opener, Dance on a Volcano, is excellent and sounds in many ways like classic Genesis. It is hard rocking and shows that Phil Collins has chops as a drummer (which many people don’t know). Entangled is a beautiful ballad that showcases the talents of Steve Hackett on guitar. I really love Mad Man Moon which is a showcase for keyboardist Tony Banks, who proves that he is a virtuoso at his instrument. Also, the closer, Los Endos, is excellent in how it brings the whole band together to revisit the themes of the whole album in an explosive instrumental track. I really do love this album—it still sounds fresh even 30 years later and really makes me feel good when I listen to it. The mark of a masterpiece of music is one that connects with the listener emotionally, and this album definitely does.
Posted by Nathan Waitman at 1:20 PM