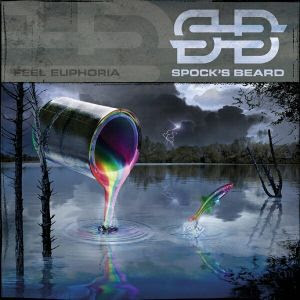 It’s funny, the previous favorite album is by a band that is perhaps my least favorite of all the prog I’ve heard, and now I’m featuring an album by my favorite prog band. This is going to be an interesting list to be sure! Feel Euphoria is the seventh album by Spock’s Beard and is an important one in their history. Following their concept album, Snow, Neal Morse decided to leave the band for religious reasons. This was a huge deal since Neal Morse was the main songwriter/singer/multi-instrumentalist for Spock’s Beard, so what would they do with him? They decided to pull a Genesis and let drummer Nick D’Virgilio become the new front man. He had already shared his wonderful voice on a couple of tracks from Snow (Carie and Looking For Answers) so it seemed like a promising proposition.

I discovered Spock’s Beard around the time that this major change occurred in their line-up. I was devastated when I heard about it because I had just discovered one of my favorite bands, and now its key member was leaving to forge his own solo path. But, I decided to look at it positively—now I was getting not just one, but two albums at a time from my favorite group of musicians. So, I awaited Testimony by Neal Morse and this album with a lot of excitement.

Feel Euphoria came first and it was an exciting moment since this was my first brand new Spock’s Beard album to explore. I recognized that it wasn’t as good as the Spock’s Beard material with Neal, but I was pleased to find that it had a charm all of its own. Spock’s Beard was far from lost without Neal at the head. Nick has a wonderful voice and this album showcases it brilliantly. There are a few weaker tracks, but that is forgivable since this is practically a debut album for Spock’s Beard version 2.0. I love the opener Onomatopoeia, it really rocks hard and brings the excitement right up front. The Bottom Line is a classic Spock’s Beard track to me that has some great synth from Ryo and a multiple sections that are all great. If anything the song is too short and they could have developed some of the ideas in it more.

Other tracks I really love are the hauntingly beautiful Ghosts of Autumn that really showcases Ryo’s chops on keyboards and Nick’s wonderful vocals. This song was written by Dave Meros, and shows that he is a strong songwriter. I love the epic, A Guy Named Sid. It may not be as strong as Neal’s epics, but it has its moment including a Gentle Giant vocal round section all done by Nick. I think Nick D’Virgilio and Dave Meros are perhaps the greatest rhythm section in all of progressive rock. They are very solid here and Alan Morse shows his signature guitar sound. Carry On is a great closer and ends on a very positive note.

I have a special spot in my heart for this album because it proved to me that Spock’s Beard was not dead—they were alive and kicking and capable of producing great music without Neal’s influence. I can’t help but smile and feel nostalgic as I listen to the album. I am very impressed with how Spock’s Beard moved on so quickly from Neal’s departure and were able to craft such a great album. This is truly a remarkable feat and I will continually appreciate the album as I keep that in mind.
Posted by Nathan Waitman at 2:35 PM