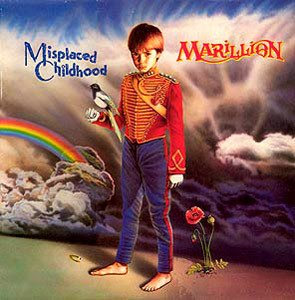 I will admit straight out that I have had a constant struggle with the band Marillion. When I was discovering modern prog bands for the first time, I discovered a band called Transatlantic and found out they were a supergroup made up of members of different current prog bands. One of the members, Pete Trewavas, was the bass player for Marillion, so I decided Marillion would be a good band to check out. Well, I was severely dissapointed because the music sounded really boring and I couldn't really identify anything "proggy" about it. But, throughout my exploration of modern prog, every once in a while I'll come across a strong recommendation for Marillion and I decide to give them another chance, usually ending in more disappointment.

One of these times I bought the album "Misplaced Childhood" because it seemed to be the album that everyone considered to be their masterpiece. I wasn't too impressed on first listen and once again regarded it as a dissapointment. But, something possessed me to try the album again, and I found it a bit more enjoyable on second listen. After a while this album managed to grab me and now I consider it as one of my favorites. Later I would try to get in to other Marillion albums without success (sorry, I just don't understand the appeal of Marbles). My conclusion is that maybe I only like the Fish fronted Marillion, because it seems that all the Marillion that has been disappointing has been the version of Marillion fronted by Steve Hogarth. Fish is such a charasmatic front man and singer that I can't help but be captivated by his performance on this album. This post has actually inspired me to perhaps check out more of the Marillion with Fish.

This album is a concept album, and I'm a sucker for concept albums- they always tend to be my favorites. The album is about losing childhood as we grow up and the loss of innocence associated with growing up. Because of the concept, the music is pretty dark for a majority of the record and Fish gives a very emotional vocal performance that is one of my favorite vocal performances on any album. You can tell that he is very emotionally invested in what he is singing about. Kayleigh is a wonderful pop song that actually recieved some popularity at the time this album was released. Heart of Lothian is a wonderful rock song with some wonderful guitar work from Steve Rothery. My favorite section of the whole album, though, is the last three songs: Blind Curve, Childhood End? and White Feather. These songs are the most progressive on the whole album and they also the most uplifting (the last two especially, Blind Curve is still depressing). The message given is that there isn't really an end to childhood, that we can still maintain the innocence we had as children and can use our knowledge to help the children of the world now. It is a great ending to a great album.

I really do love this album despite it not seeming completely progressive to my ears. I am not a huge fan of music that came out in the '80s, in fact I believe this is the only '80s album in my whole top 100. But, that perhaps makes it even more special, because it was released in the year of my birth, 1985. This album is also special because of the inclusion of Pete Trewavas who is one of my favorite musicians of all time (and he does do a lot of impressive bass playing on this album). I may never fully understand Marillion's huge fan base in the prog community, but I do have a place in my heart for Misplaced Childhood and consider it a gem of progressive rock.
Posted by Nathan Waitman at 8:48 AM