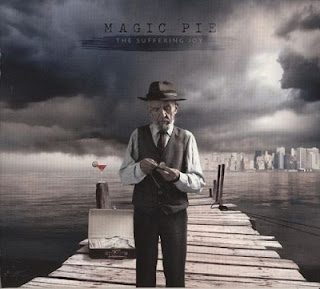 “The Suffering Joy” is the third album by Norwegian proggers, Magic Pie. The first two albums, “Motions of Desire” and “Circus of Life” had moments of brilliance, but oftentimes did not seem to have the same high quality throughout the entire album. But, when they were performing at the top of their abilities, they really played some fantastic music on those albums. With their third album, I feel they have taken the best of their previous two albums and created a truly consistent, great album that is among the best that modern symphonic prog has to offer, and is an early contender for album of the year.

The album kicks off with the powerhouse epic that is “A Life’s Work.” Following a similar structure that Neal Morse sometime employs, there is a soft intro introducing some of the lyrical themes of the album over some delicate keyboard washes, before the rocking overture kicks in, which really showcases how great this band is at playing their respective instruments. This moves into a slower section with some beautiful harmonies before finally getting to the meat of the epic where the musical themes from the overture can be heard to full effect. This epic has everything you could want from progressive rock: inventive keyboards, soaring guitars, stunning harmony vocals, and a great backbeat of powerful drum and bass work. There are even some female vocals that are used to great effect over some chugging guitar. If I have any criticism for this wonderful track, it is perhaps that it is a tad long and could use trimming a few minutes to keep it more interesting. But, that is really a minor complaint because by and large this is a fantastic epic that includes head bopping heavy prog moments that allow the keyboard and guitar to play off of each other and a huge sing-along style chorus. There is just a ton of fun to be had here.

The album continues with “Headlines,” which is another fun track. There is some great acoustic guitar, more harmony vocals, and a fun, almost bouncy melody that brings to mind early Queen at times. There is some great guitar work and very dramatic vocals. There are also some fast paced instrumental sections that are a lot of fun. “Endless Ocean” is a short ballad that is a nice break from the intensity of the tracks that precede it. There is some great acoustic guitar, piano, and once again, beautiful vocals over what sounds like strings. It is a beautiful shorter track, which is quite different for a band that is used to long-form progressive rock pieces.

Things get fun again with “Slightly Mad” which is one of my personal favorite tracks on the record. The opening is quite chaotic, which fits perfectly with the title and meaning of the song. Keyboards and guitar go crazy against a powerful rocking drumbeat. There is some impressive acoustic guitar that leads into the vocal section. This track is just pure fun to listen to and is really well done. One of my favorite sections of this song is where it breaks down into an almost funky and jazzy section complete with wah wah guitar. The guitar solo is very impressive here. This whole track is just a blast to listen to, and is amongst my favorites from their entire catalogue.

“Tired” took a while for me to warm up to. It is a fifteen minute epic that begins with some great majestic guitar and keyboards. There are some interesting keyboard sounds used here that are interesting to me. This track is a lot more laid back than the rest of the album for a good majority of the song length. I think that was why I was initially not excited by it. I had come to expect fast, heavy sections due to the previous songs. But, just because it is slower paced does not mean it is bad. It actually has a majestic beauty to it. About nine minutes into the song comes a typical fast paced, instrumental section that is a sort of trademark of the Magic Pie sound. In this section fast guitars and keyboards intricately play against one other. Once again, this is just so much fun to listen to and I enjoy it immensely. This track has gone from being a little overlong and boring to being one of my favorites on the record.

The album closes with “In Memoriam” which is actually kind of a somber note to end the album on. This one took some getting used to as well, but I like the almost eerie mood of the track. For me it is the mood and vocal performance that makes this track work. I like the ending that has a somewhat intense buildup that really works well. It is a fine closer to a really excellent album.

I love this album and consider it to be Magic Pie’s best album by far. They have really come into their own sound on this release. This album is one of the finest examples of modern Symphonic Prog. There is some great playing, the musicians seem to be having fun and the concept and lyrics are really good. I think this is a strong contender for best album of the year. Magic Pie has truly grown into a great band with this release and I look forward to see what they are capable of in the future. If they keep this up, I think they could become one of the leaders of Modern Symphonic Prog.