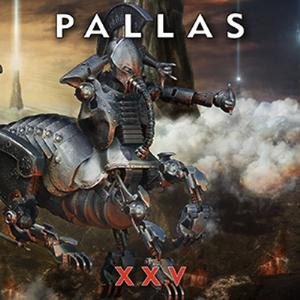 Pallas are a classic neo-prog band from the '80s. They were one of the founders of the genre along with such bands as Marillion, Pendragon and IQ. Their first full-length album, The Sentinel, is regarded by many as a masterpiece of the genre. This new album, titled XXV, is actually a sequel to that classic album. I admittedly have not heard The Sentinel, but I am trying to listen to all the major progressive rock releases of 2011 and this album came on my radar through various progressive rock sites. It is most certainly a concept album that follows the storyline from The Sentinel. I can't speak as to how it matches up conceptually and musically to The Sentinel since I haven't heard it, but I think that XXV can stand on its own and is a good concept album in its own right. I'll most likely try to take a listen to The Sentinel later and see if it in any way changes my opinion of this album. I predict that it will not, but you never know.

The album begins with creepy sound effects that instantly put you into the mood of this album. Things seem a little odd in the world the listener is being thrust into. Then, the band kicks in with the first track of the album, "Falling Down." It is a nice majestic rocker that gets the album started in fine form. I love the bass line that chugs along throughout the song. There is a great section that allows for the keyboardist to shine through a very unique solo that is one of my favorites through the record. It is a great way to start things off and to set the stage for what is about to unfold. "Crash and Burn" keeps things moving at a fast pace, and it happens to be one of my favorite tracks on the entire album. It starts off with more sound effects to keep up the dystopian mood that is present throughout this disc. Then things get going with a particularly fun groove that is almost funky in its execution. I love the keyboards here that blend really well with the soaring guitar. The drum work is really impressive on this song and keeps things going at a great pace. At the end of the song there is a really fun, frenetic breakdown that I think is really down well.

Things slow down quite a bit for the next track, "Something In The Deep." I'll admit that the first couple times I heard this song, I was a little bored. It moves at a snails pace with grand washes of keyboards. After listening to this a few more times, I see its value within the story. It really keeps the mood of the album and is a great showcase for the vocalist, Paul Mackie. There is a certain haunting quality about this song that is really interesting to me. I do love the ending of this track with the orchestral arrangement of strings and horns playing over a mechanical beat. The next track is "Monster" and it is a pleasant rocker, but somewhat below the quality of the three tracks that preceded it. I enjoy the feeling of paranoia that comes across through this song, which is perfect for the story. Once again, not a bad song, just not particularly memorable.

"The Alien Messiah" really gets the story going. I love the keyboard washes that start this song and how they evoke an alien feeling before getting into this rocker. For some reason I get an almost middle eastern feeling when listening to the track. I think the song might outstay its welcome just a bit, starting with the spoken word section in the middle of the track. Next we have "XXV (Part 1)" with a big, majestic feel, which is appropriate since this is the centerpiece of the album. I wish this track was maybe more fast-paced and varied, but I do love the sing-along chorus. "Young God" is fairly heavy, with some really metal guitar playing. Even Paul Mackie seems to be channeling the voice of an '80s hair band frontman. There are some interesting guitar and keyboard solos in the instrumental parts of the song, but overall I find this to be one of the weaker tracks.

"Sacrifice" is a more straight-forward rocker. I actually rather enjoy it and feel like it is the album getting back on track after a somewhat weak middle section. "Blackwood" is a great short instrumental track with beautiful strings and angelic vocalizations that leads really well into "Violet Sky." I love this moment on the album, it is really beautiful and continues to evoke that "otherworldly" feeling that is present throughout the album. "Violet Sky" is a beautiful track. It starts off with some acoustic guitar and an interesting, alien sounding keyboard sound. I think Paul Mackie's voice is excellent on this track. The track is both emotional and thought-provoking. It is surely one of my favorite tracks on the record. "XXV (Part II)" is the grand conclusion of the album and I think it is rather excellent. It perfectly evokes the apocalyptic feeling it is going for with some great sound effects before reprising "XXV (Part I)" in glorious fashion. I absolutely love the guitar solo at the end. It really soars before the plaintive vocals come in to close out the album.

This album has all the ingredients for a progressive rock masterpiece, but for some reason they don't completely combine perfectly. There seems to be something missing here. It is a real shame because I love the concept of the album and at times the album really soars to impressive heights. I feel the apocalyptic and alien mood that they are trying to convey here work perfectly. There is a very specific feel to this album that is constant throughout. I do find it interesting however that to my ears XXV tends to sound both like a retro-prog album from the '80s era, but also manages to have a futuristic sound. It is a strange blend, but somehow it works to convey the correct mood for the album. At times the album really works, at other times it can be boring or monotonous. So, I must conclude that XXV is a good album, but misses the mark from being an excellent progressive rock release. It is a shame really because there is a lot of potential here. Now I need to listen to some of their other releases, especially The Sentinel, and see if it at all changes my view of this album.