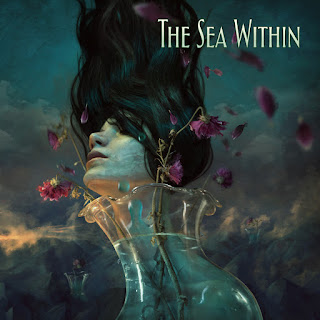 The Sea Within is a new progressive rock supergroup containing some of the best names in the business. We have Roine Stolt (The Flower Kings, Transatlantic, Agents of Mercy) on guitars, Tom Brislin (Yes, Renaissance, Spiraling) on Keyboards, Daniel Gildenlow (Pain of Salvation) on vocals, Jonas Reingold (The Flower Kings, Karmakanic) on Bass and Marco Minnemann (The Aristocrats, The Mute Gods) on drums with Casey McPherson (Flying Colors, Alpha Rev) performing vocals on several tracks as well as guest spots by notable musicians such as Jon Anderson, Jordan Rudess and Rob Townsend. With the bands mentioned above, you might feel that you can start to get an idea of what this project might sound like. However, to my ears, this album sounds completely fresh and not at all a carbon copy of the bands from the respective members. I think this is a remarkable feat. In the genre of progressive rock there are lots of supergroups and lots of musicians that share a lot of different bands with each other. The fear of this is that these bands can all start sounding similar and therefore somewhat predictable. I am happy to report, however, that this is not the case for the Sea Within.

There is a real sense of beauty and wonder throughout this record. It sounds to me like the band wanted to write very distinct songs with a clear focus. There aren't many extended instrumental workouts that don't fit the song. There are a few extended solos or jazzy interludes, but they don't feel like they overstay their welcome- they always stay in service to the song. Another thing that I think really benefits this record is that it is a total melting pot of different writers. These aren't all Roine Stolt songs that the band just came into the studio and played; each band member had a hand in writing different songs. This gives the band more of a unique identity and makes for a more refreshing collaboration where the whole is more than the sum of its parts.

There are so many highlights throughout the album and every musician is at the top of their game. I want to point out the vocals, which I find completely magnificent. Daniel Gildenlow has always been one of my favorite prog rock vocalists, but he really shines throughout the album, sounding at times ethereal and hauntingly beautiful, but can bring in the power as well when the song is more fast-paced. Just listen to him in "They Know My Name" for more delicate, precise vocals, and then switch to "An Eye For An Eye For An Eye" for more hard hitting rock vocals to see an example of this contrast. Also excellent is Casey McPherson on the tracks he sings on. It almost seems unfair for one band to contain two of the genres best singers, but they both shine on their respective tracks and complement each other extremely well. "Goodbye" is a particularly great showcase of McPherson's soulful vocals. He has such a unique character and warmth to his voice that is always welcome to my ears.

The other musicians also get their moments to shine, such as Tom Brislin's excellent jazzy solo in the middle of "En Eye For An Eye For An Eye" or Stolt's achingly beautiful extended guitar solo at the end of "The Hiding of Truth". There is no shortage of beautiful instrumental moments. And that is what I love about the album. At its core, it is a melting pot of all of the influences of the musicians and the bands that they come from, but this results in something unique with its own singular identity.  Just to give an example of the variety, there is some harder edged almost progressive metal ("Ashes of Dawn"), some great jazzy instrumental workouts ("An Eye For An Eye For An Eye") and great powerhouse emotional ballads ("The Hiding of Truth"). I also have to mention "Broken Cord" as one of my favorite tracks (and probably my favorite song of the year so far). It is just a perfect example of all the things I've been mentioning in this review: both vocalists at the top of their form, different sections with multiple influences containing catchy pop hooks, atmospheric ambient rock moods, and bombastic proggy explosions.

As can be sensed throughout this review, I really love this record and think it will end up high on my list of best albums of the year. The only negative I really have is that I don't find the bonus disc that comes with the album as strong as the main album. I absolutely adore "The Roaring Silence" which I feel could easily be part of the main album, but the other three songs haven't grabbed me as of yet. This could just be down to my taste because I've seen other reviews mention some of these songs as highlights of the album for them. But, that aside, this album is really a fantastic achievement, especially considering that it is a debut for this set of musicians. Their experience and skill amongst their other bands is certainly a large key to this album's success. And despite the musicians all being in bands that could be considered similar, they have managed to produce an album that is unique and stands on its own merits. This album comes highly recommended to all prog lovers!

Posted by Nathan Waitman at 3:21 PM