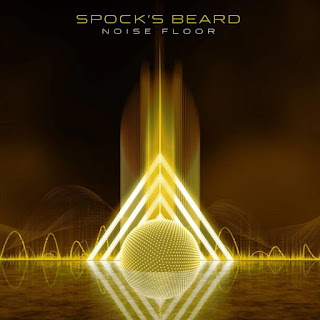 Spock's Beard is well known in the Progressive Rock community. They can be considered pioneers of the modern prog revival and have been around for over twenty years. The have gone through many lineup changes throughout their history, but they always hold on to their signature sound even while forging new ground. "Noise Floor" is the band's 13th album, and is truly an amazing achievement for a band with such an extensive catalog of high quality progressive rock releases. The newest album blasts off with "To Breathe Another Day" which is a high energy rocker that sets an energetic pace for what is to come. There is a fantastic middle instrumental section that gives the whole band a chance to shine as Alan Morse's guitar and Ryo Okumoto's keyboards trade solos with the high octane rhythm section of Dave Meros on bass and Nick D'Virgilio on drums. Ted Leonard also sounds amazing on vocals throughout the track, bringing to mind Steve Walsh of Kansas fame.

From that solid opening, the band continues to really shine throughout the album. The musicianship is strong throughout, which is no surprise considering all those involved. The songs are really well thought out and are a joy to listen to. The band was clearly focusing on a more melodic approach to songwriting, which I think really makes for an enjoyable listen where every song is catchy in its own way and never outstays its welcome. "Somebody's Home" is a gem of a song, making use of the acoustic guitar interplay that the band is known for, but instead of being showy and needlessly complex, the focus is on the song and the emotional message in the words. It is a sweet song that really shines with beautiful strings and Ted Leonard giving a great impassioned vocal performance. It is certainly a highlight of the record.

"Have We All Gone Crazy Yet" is a personal favorite of mine, and I'm sure will be a personal favorite for many long-term fans of the band. This is where some of the band's fun, quirky style comes into play in spectacular fashion. What drew me to the band in the first place is that first and foremost, the music is fun. I listen to music mostly to experience joy and excitement, and I feel that Spock's Beard embodies this. This track bounces around with some wonderful interplay from all the instruments, with some jazziness and twists and turns that keep the listener guessing as the track progresses. This is excellent prog to my ears. "So This Is Life" comes as a bit of a breather and is a great mash-up of The Beatles and Pink Floyd. I appreciate what the Beard are doing here, and this track sounds different from the tracks surrounding it, and frankly from most of the music in the Spock's Beard catalog. But this gives it a certain freshness and makes the track that much more interesting.

The final three tracks of the main album are all fantastic pieces of music that close the album strongly. "One So Wise" is another joyous expression of music from the band that calls back to some of the strongest pieces of the last couple Spock's Beard albums (both of the Ted Leonard era albums, Brief Nocturnes and Dreamless Sleep and The Oblivion Particle). It is anthemic and has a Kansas vibe to it, especially Ted's incredible vocals. I love the bass-line and how the song moves along so seamlessly with some great keyboard work by Ryo Okumoto. This is modern Spock's at their finest. But, speaking of Ryo, he isn't done shining yet, as "Box Of Spiders" is purely a showcase of his talents as a writer and musician. This is maybe my favorite Spock's Beard instrumental ever. Up to this point, the focus has been on more melodic, catchy songs, but this is where the band just goes full on prog and the results are glorious. This piece goes through so many changes in time signatures, styles, and sounds. This is just an incredible work of crazy, progressive, complex and intricate art. I love this track. The album closes ironically with "Beginnings" which hearkens back to the classic Spock's Beard sound of the Neal Morse era of the band more than any of the other tracks, with some interesting vocal interplay between Alan Morse, Nick D'Virgilio and Ted Leonard. It is majestic and grandiose, which is a fantastic way to end an incredible album.

There is also a bonus disc called "From The Cutting Room Floor" with some additional tracks that are a great accompaniment to the album. I think there is some wisdom in separating out these tracks from the main disc. These tracks, although also great songs, don't quite fit in as much with the rest of the songs, and find a great home here on what can be considered a fantastic little EP. "Days We'll Remember" is a nostalgic ballad that has a strong sense of melody and a great sing-along chorus. "Bulletproof" is perhaps my favorite of the bonus disc songs with a very positive feel and some great pop sensibilities. Things slow down just slightly for the very pleasant "Vault" that is very influenced by Ted Leonard, sounding even like his other band, Enchant, at times and has a fantastic build up. This disc closes with the fabulous instrumental "Armegeddon Nervous" which moves along at a quick pace and allows for the band to shine one last time with some great instrumental interplay.

"Noise Floor" is a remarkable achievement for a band that is on their 13th album. I am always so impressed with the band and how they adapt as they go through each lineup change. This time they lost Jimmy Keegan, but they were able to bring back Nick D'Virgilio in the studio to cover the drum parts. But, the band are still going strong and I hope above all other hopes that the band keeps going and keeps evolving. Everybody shines on this album, from the musicianship to the song writing and arranging, this is a beautiful album full of amazing compositions. I'm so impressed with the band and heartily recommend this album to all prog music lovers. They are indeed firing on all cylinders and I can't wait to hear more in the future. This album will be on heavy rotation for me for quite some time.