Hourglass- Obvious to the Oblivious 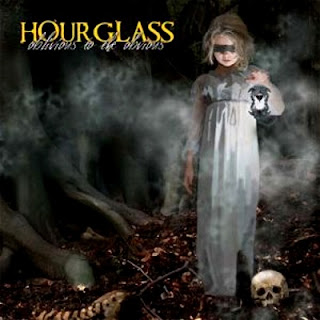 Hourglass is a new band to me. They are based out of Orem, Utah, which happens to be the next city over from where I live in Provo. I discovered them on one of my favorite prog sites www.dprp.net where there was a very positive review of this album. From there I went to Hourglass' website and listened to samples from their latest album and was blown away. I bought the CD from them immediately because of how impressed I was. When I recieved the CD in the mail a couple days later, I couldn't wait to listen to it! I put the CD on my ipod and started to play the music and...I wasn't all that impressed. I was really bummed out- had I made a huge mistake? Luckily, I decided to give the album another chance and was blown away by it all over again. How could I have been dissapointed with this album on first listen? This is definitely one of my favorite albums so far this year and is a strong contender for album of the year.

This album could be classified as Progressive Metal, but it is never too heavy. The heaviest track is easily the first one, On the Brink, that starts off Disc 1. This song really reminded me of The Glass Prison by Dream Theater, which is one of my all time favorite songs. It has a powerful riff, and the whole band plays fantastically- it is a perfect start to a great album. The singer, Michael Turner, sounds like Ted Leonard from Enchant, but also gets in some growling in the opening track. He hits this high note in the second half of the song that just blows me away every time- he is truly a great singer. What really impresses me about this band, though, is the amazing bass playing of Eric Blood. There are moments where the music stops and Eric Blood plays an awesome bass part by himself before the rest of the band come in. These are some of my favorite parts and show how funky and rocking he is as a bass player. Amazing stuff!

There is a lot of stuff on this album, so I think it would take too long to go through each song individually, so I'll just give some highlights. What is amazing to me is that this album spans two whole discs and there is not a boring or bad moment throughout the whole album. I love Pawn II, which seems like an instrumental until the soft, tasteful vocals come in about halfway through the song. There is some amazing playing going on in this song and it just blows me away every time. I love the closing epic on the first disc, called 38th Floor. It is over 20 minutes of highlights that move seamlessly from one piece to the next. Just so you know I'm not playing favorites, I really love the guitar playing of Brick Williams, it is truly outstanding.

I love the instrumental piece on the second disc, Delirium. It gives all players a chance to shine including the two band members I haven't mentioned yet, Jerry Stenquist on Keyboards and John Dunston on Drums. There is no weak link in this band, every member is fantastic! And, who can forget the awesome epic that closes the album? The title track, a thirty minute piece split into 5 parts, is incredibly done and showcases all the great styles that this band includes in its music. There are heavy bits, some great singing, more tasteful bass work, a beautiful ballad section, and a jazzy ending. It is the perfect ending to a great album as the band members jam together.

I love this album! The more I write about it, the more excited I get about it. It is an album that keeps growing on me and really makes me appreciate the complexity involved in progressive metal. I would give this album a perfect score, but there are some minor imperfections, mainly the sound quality of the album is not as crisp as I would like it to be. Also, I have a feeling Hourglass have even better albums to come, so I want to give them room to grow. Great work here and a strong contender for album of the year!