Kaipa- In The Wake of Evolution 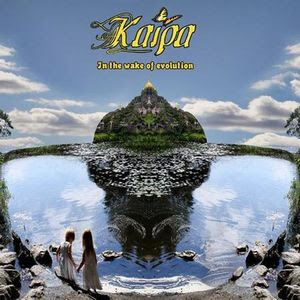 I know, I know, it has been a while since I've written in this blog. However, I thought I would return to my album reviews with the fantastic "In The Wake of Evolution" by Kaipa. To be fair, this is the first of only two albums that I've heard so far this year, so in regards to 2010 albums, I'm not so far behind. But, I figured since several prog albums are coming out soon, that it might be nice to get back into reviewing with the first new album of 2010 that I heard.

Kaipa was a classic '70s prog band that reunited triumphantly in the early 2000s with an incredible album called "Notes From The Past." The two main men of Kaipa were Hans Lundin and prog superstar Roine Stolt. Unfortunately, Roine Stolt left the band after the great MindRevolutions, but Hans Lundin decided to keep the band going and it led to two incredible albums-- Angling Feelings and now In The Wake of Evolution. This new album sparked a small obsession with this band for a few weeks. I'll admit that I wasn't a huge Kaipa fan, but after hearing the brilliance of In The Wake of Evolution, I decided to dig into their back catalogue (most of which I already owned) and was blown away but what I heard. I love this album mainly for the fact that it (re)introduced me to one of my favorite bands. This is full on happy, uplifting prog and I love it.

The album opens with one of my favorite openers of any album, the title track, In The Wake of Evolution. This track contains all I love about this band in a little over 10 minutes. It starts with Lundin's unique keyboard sounds before the band kicks in for a prog powerhouse of an opening. The music stops as the beautiful voice of Aleena Gibson comes in. What progresses is a beautiful track that is a perfect blend of both lead singers (Patrik Lundstrom comes in for the second verse) and of instruments. There are super fun keyboard sections and some out of this world drumming. It is all really fun and exactly how I like my prog.

The other incredible track on this disc is the third one, Electric Power Water Notes. This is the epic of the album at 17 minutes, and it manages to captivate throughout. It goes through many interesting instrumental passages where all band members are allowed to shine. The rest of the tracks are great as well and keep up the same high level of quality that has come to be expected from Kaipa. There is a good balance between both lead vocalists throughout the album, and I do want to mention that the closing track, The Seven Oceans of Our Mind, is a great finale. I love when the vocalists are doing a sort of chant as the music builds and the vocalists are allowed to shine. It is a brilliant finale to a great album.

What I love about Kaipa is that they are so distinctive. They have a very recognizable sound that distinguishes them from all the other prog bands and separates them from their influences. Often prog music today can sound too much like the prog giants of the '70s that have influenced it. But, I feel that Kaipa does a wonderful job of paying homage to their influences, but crafting out a unique sound all their own. I believe this album stands up well against their other modern albums, and I can't wait to see where this band goes next. This album comes highly recommended and is the first great album of the year that I have heard. Expect it to make a strong showing on my final list of top 10 albums of 2010.