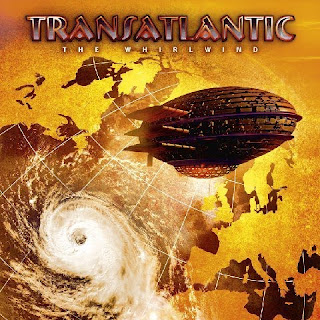 “The Whirlwind” is a masterful concept album from the minds of Neal Morse, Roine Stolt, Pete Trewavas and Mike Portnoy. When I heard that Transatlantic was reuniting for another album, I was ecstatic. “Bridge Across Forever” is my favorite album of all time, and when I discovered that Transatlantic essentially broke up after this masterpiece, I was crushed. I figured that I would never hear new Transatlantic material. Thankfully, I was wrong, and not only did Transatlantic meet my high expectations, they exceeded them. “The Whirlwind” is a beautiful album that captures for me four talented artists at the peak of their creativity and ability.

“The Whirlwind” is one long epic piece split into 12 separate sections. You can’t have a large epic without an overture, so this album begins with a perfectly constructed overture. The overture contains many of the main themes that will be highlighted throughout the whole album, and I feel the overture itself is a good metaphor for the whirlwind itself, as the music gets more intense as it goes. “The Whirlwind,” I’m sure can mean different things for different people, but for me it is the distractions and worldliness and trials that plague us in this life. The things of the world are temporary and will just be blown away by The Whirlwind that is bound to come. This is the theme of the second piece, “The Wind That Blew Them All Away.” People are trying to find things in life to make them happy, but these things are all temporary and of this world, and will be blown away by the whirlwind.

“On The Prowl” begins with a brilliant bass line from Pete Trewavas, who I must say is exceptional on this album. This piece has a great groove and a cool organ solo from Neal. The purpose of this piece is to show that God is the one who is in control of the whirlwind and is using it as a test of sorts to try to make people turn to him and away from the things of this world. “A Man Can Feel” begins with a brilliant vocal by Roine Stolt before it hits the sublime chorus. This piece is showing how alone man can feel when the whirlwind tears away all the things of this world and takes away all the things that he thought made him happy.

“Out of the Night” is a moment of temporary relief where the person feels they are out of the whirlwind. But, the whirlwind comes raging back, and they must continue to face it. This happens many times in life, where you feel you are finally free of your trials, you have a “sudden alright,” but a new trial comes and once again you are back in the whirlwind. This piece of the epic is a great showcase of all four vocalists and it goes through several themes that have occurred so far in the epic. “Rose Colored Glasses” is one of my favorite pieces and may seem out of place in the epic because it is a song written by Neal about dealing with his Father’s death. However, I feel it fits in well with the concept because I feel it is a real life application to a whirlwind that we face- death of a loved one. But, it is by having the right perspective that we can look beyond the whirlwind to the true meaning of things. I believe this is a good centerpiece for the epic because it shows that there are real trials that are faced, but there is a hope if we just have the right perspective, which leads perfectly to the second half of the album, which basically outlines how to have this correct perspective.

“Evermore” is a glimpse at the promise that is given if we endure the whirlwind. “Set Us Free” is a cry for help to be free of the wrath of the whirlwind that continues to rage around us. “Lay Down Your Life” gives us the method that we need to get past the whirlwind- we must lay down ourselves, and all the worldly things that have their hold on us and truly give ourselves to God. “Is It Really Happening?” is the shock and awe that we feel as we realize the greater purpose of life that is ours if we lay down our natural selves. Then, the big grand finale, “Dancing with Eternal Glory,” brings the message home and ties the whole album together. It is an expression of the beauty and true majesty of eternity and life beyond the whirlwind. Especially meaningful to me is the idea that God has always been there in the whirlwind helping us through and trying to show us the right way and give us the key we need so we can partake in this Eternal Glory. We can all be partakers of this Eternal Glory if only we endure life’s trials and seek out God through the whirlwind.

This album, at its core, is deeply religious, which isn’t hard to believe since Neal Morse is involved. The surprising thing is that the rest of Transatlantic is not as religious as Neal is, and yet they allowed such a strong Christian message in this album. There has actually been some controversy about this since many were hoping that this album would allow for Neal to express his creativity without promoting his Christian message that has been such a big part of all his solo albums since leaving Spock’s Beard. However, I believe that Neal feels so strongly about his religious convictions that he can’t help but include them in any project he works on and that those who are offended by it just have to not listen to Neal anymore unfortunately. Obviously the other guys in the band were fine with the lyrical content and even contributed to it, so I’m sure they are all happy with the finished project, and the message isn’t as blatant here as it is in Neal’s solo albums (except perhaps in the last piece, “Dancing With Eternal Glory”).

But, I don’t have a problem whatsoever with the lyrics (which could have to do with the fact that I’m a Christian myself). What I can say, is that I feel this album is a huge success. I focused on the lyrics in my review, but the music is also incredible. Pete Trewavas really impresses me with his bass work on this album, it is consistently amazing throughout the album. Roine Stolt has some amazing guitar solos peppered throughout the album (some of the best in my opinion come in the middle of “The Wind Blew Them All Away” and “Out of the Night”). Mike Portnoy is amazing on drums as usual and I always love Neal and he continues to shine on this album. I also want to point out the last half of “Is It Really Happening?” as one of my favorite musical moments of all time where the music gets faster and faster and all members of the band play at breakneck speed- it always puts a huge smile on my face.

I love the creativity that abounds when these four individuals get together to create music and I hope to hear a lot more from them in the future. There is a sense of fun in this record that is infectious and that is part of what I love about what Transatlantic brings to the table. They can be goofy and fun in one moment and heartfelt and passionate the next. They truly have a love of the progressive rock of the seventies and that shines throughout the album as well. I can’t wait to see these guys in concert in April and I love everything that they are involved with. This album is most definitely a masterpiece and I expected nothing less from the creative forces at work behind it.