Agents of Mercy- The Fading Ghosts of Twillight 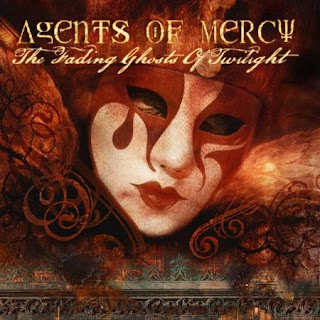 I love this album! It is simply beautiful. It has grown on me through repeated listens, and now I really have a great appreciation for each song. First, a small background on the album, it is mainly the brainchild of one of my favorite prog musicians of all time: Roine Stolt. His signature sound is all over this album. Another notable feature of this album is the singing of Nad Sylvan. I'll admit, his voice took me a little getting used to, but once I did, it really enhanced the music. His voice is a cool cross between Peter Gabriel, Phil Collins and Fish- 3 of my favorite singers. He has a lot of character in his voice that really comes out in the compositions of this album.
The album is a little more laid back than your average prog album, but I love it that way. It gives the album a really cool mood that is consistent throughout. And, don't be misled, there are moments when it rocks hard. It is a brilliant combination of classic Genesis, Beatles, and the signature Flower Kings sound that comes with Roine Stolt's songwriting. It makes for a rather enjoyable listen that I just can't get enough of. It has stayed in the CD player in my car since it was released and has been a joy to listen to.
The title track kicks off this album with some tinkling piano and Nad's signature vocals. It is a brilliant piece that moves seamlessly. "Unwanted Brother" took a little more getting used to, but once I did, I found myself in love with this song. I love the "like a thief in the night" part and how the harmonies really fit together. It is just really fun, calm little song. "Afternoon Skies" is a delightful song strengthened by some strong acoustic guitar playing. It is really peaceful with wonderful vocals. Then comes one of my favorite songs of the whole album "Heroes and Beacons". It starts out softly before it builds into a powerhouse of a song. It is full on prog in all its glory at its best moments, with great mellotron and guitar playing from Roine. I do have to make a special note of the guitar solo from Roine Stolt towards the end of the song, it is beautful and tasteful. Just another reason why Roine Stolt is one of my favorite guitarists. I just find myself captivated by the song from start to finish. Another captivating song for me is the next one, "Jesus on the Barricades". It is a slow ballad, but it is emotionally powerful and features some excellent basswork from Roine's bandmate, Jonas Reingold. It is one of my favorite moments of the album and a strong contender for best song of the year.
What I like about "Wait For the Sun" is that we finally get to hear the wonderful vocals of Roine Stolt. I've always really liked his voice. "A Different Sun" is another delightful song with some big prog sounds and another wonderful guitar solo from Roine. "Ready to Fly" is another song with Roine Stolt on lead vocals. It is a wonderful acoustic piece that is really uplifting and fun. "People Like Us" is also a great song with a bouncy, fun melody. I must admit, it is probably the least memorable song on the album for me. This leads to my favorite song of the album "A Soldier's Tale" that has everything I love in prog rock. There are even some great horns in the mix that really enhance the whole song. It is a powerful song that is beautiful, rocks, and is extremely proggy, often all at the same time. I can't express how much I love this song. I love the lyrics too, about a soldier who feels guilty about killing in war and never gets rid of that guilt no matter how much he is forgiven by God. It is brilliant. "Bomb Inside Her Heart" is another fun, poppier tune that is really catchy with a lot of good acoustic guitar. This leads to the awesome conclusion of the album, "Mercy and Mercury". This song brings the album full circle with some brilliant rocking bits along with call backs to the title track. I really love this track and think it is the perfect ending to a wonderful album.
As you can tell, I'm having a difficult time really putting my feelings for this album into words. I really love the laid back mood of the album, a great soundtrack to spring and summer. There is a lot of great acoustic moments, which makes sense since Roine Stolt originally intended for this album to be an acoustic solo album. But, there are also a lot of great prog moments that really call back Genesis at their best. Nad Sylvan also has managed to really capture the mood of this piece with his vocals. This album gets a high rating merely for the joy it gives me and is a strong first contender for album of the year, although there are many great albums coming, so I'm not sure if it can hold that spot for long...
Rating: 9/10
Posted by Nathan Waitman at 2:04 PM