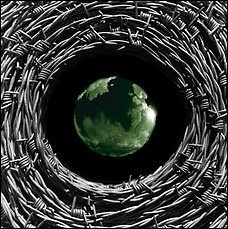 This is my first album review of the year, and I am pleased to say that it is a good album. Umphrey's McGee is a jam band out of Chicago that has had increasingly progressive rock leanings throughout their history. I listened to their album "Safety In Numbers" a while ago, and was not overly impressed. There were some cool things on there, but overall I found it to be quite forgettable. So, I had my doubts about this album, but I have to say that it is a vast improvement over "Safety In Numbers" for me.

The album begins with "Made To Measure" which is a fun, bouncy Beatles-esque track. I really love this song and find it to be one of the more fun on the album. It is a great start for what is to come. The short "Preamble" sets the stage for the big epic of the album, "Mantis". I love so many things about this song. I love the piano line at the beginning that is a little haunting, and then it launches into a great lead guitar that gives the theme of the whole piece. This song moves from one section to another without stopping for the listener to take a breath. There are times when I felt the song maybe went on a little long, but there is so much great stuff included, that I can forgive this minor complaint. There is also some great string parts, particularly at the end. Great stuff!

"Cemetery Walk" is my personal favorite song of the album. I love the feeling the eerie piano gives at the beginning. This album, after the first song, seems to have a slightly darker mood to it. It is such a fun song with a great groove to it that is perhaps reminiscent of Steely Dan. It is very jazzy and funky and irresistably fun to listen to. I recommend it strongly! The band obviously felt the same way about the song because they immediately follow it up with "Cemetery Walk II" where they take the same great medley and turn it into an electronica dance song. It is very strange, and perhaps a little unnecesary.

"Turn and Run" is another favorite track of mine. It starts of with great acoustic guitar that provides a foundation for the rest of the song. The best part of the whole song, though, is the amazing guitar solo at the end. This is perhaps the most amazing display of guitar skills I've ever heard- it is just perfect. It would be a lot of fun to see live. "Spires" is another fun song. I felt an almost ELO vibe on this song. It is heavy in the first part, but then gets a lot more spacey towards the end. I love the vocal harmonies at the end, very cool stuff.

This is where the album kind of takes a turn for the worse. I really don't care for "Prophecy Now" which feels almost like filler to me. It is a droning piece with a lackluster vocal that follows the piano melody exactly. "Red Tape" is a little better, but it is particularly forgettable to me. But there are some cool horns on it and a great synth solo. I just don't feel it quite matches the quality of the better stuff on the disc. Thankfully, Umphrey's manages to get back on track right before the album ends. The album closer, "1348" is a great track that has some great guitar lines that are really rocking. It is a great finish to a really remarkable album.

So, in conclusion, despite my reservations, I thoroughly enjoyed this album. I feel Umphrey's are coming out of their shell and developing into a full fledged prog rock band. When this album is at its best, it can contend with the best stuff in the progressive music scene today. I love the solos, which still remind us that this is a jam band at heart. So, I feel this is a potential contender to be on my top ten list at the end of the year. It is definitely a grower, and I love it more and more with each listen. I was going to give it a score of 7 originally, but after repeated listening, I had to raise that up a little. Great job, guys! Keep improving and you may end up as one of my favorite bands!